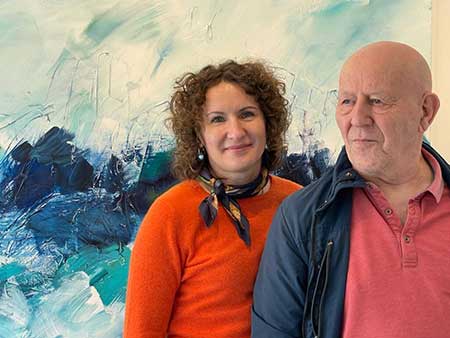 Janus Avivson is an exhibition organiser and art collector since 1967. He made art shows and events in Cracow, Aarhus, Leuven, Hastings and London, Paris, Cannes and Marseille, also Stockholm, Vienna, Zurich, Bologna, Tokyo, Washington DC, New York, Berlin, Frankfurt and Cologne. He was also, amongst others, a miner, a hospital personnel, a farm-hand, chauffeur, an assembly line factory worker, publisher, double-decker bus driver, filmmaker, film critic, book and antique dealer, actor and a stunt-man. He is based in Hampstead, North West London. At present he runs his gallery and book and art collection with his wife, Katarzyna.

Avivson Gallery, inaugurated in June 2018 and situated in Highgate village, is the third articulation of a European exhibition space dedicated to the culture of contemporary art by its founder. At a time when structural change in the art economy has caused the closure many smaller galleries, Avivson sets out an alternative agenda to maintain a vision of art as a means of creative cultural involvement and freedom of thought and expression.

The purpose of an art gallery is to celebrate the greatest potential that art, in all its cultural extensions, offers. That is, as an unregulated and generative arena for imagination, creativity and critique.

To this end Avivson’s initial three year program will host a range of exhibitions building on its associations with independent artists, encouraging collaborative proposals from emerging national and international curators, underwritten by shows of work from the galleries own collection.  Avivson Gallery aims to enrich its immediate environment by providing an ongoing location for genuine dialogue and encounters with significant contemporary art.